Many do not realize that here, yes it seems physical, the vibration fuses the molecules needed, to make the imagery of our avatar. Out there in stars, it will be either the same, or faster in vibration. Those who are faster in their vibration, will be higher in dimension. In that case, they will look spiritual, to humans.  Just like humans would look like a blown up balloon, to those in 2D. Scientific fact. 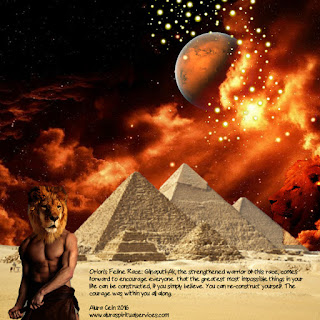 So, I always say everyone is spiritual, no matter what. Even here.. All consciousness is energy, energy holds intelligence. Even humans here, they are spirits, body and soul. The body is made up of neutrons, molecules, and atoms, even the so called matter, down to its molecules, is really energy. It is the vibration that makes it appear to be "physical". In all stars, nebulas, and worlds, there is consciousness, consciousness is everywhere, and in everything... Orion is one of the places that has many souls too.

Although I only ever hear the starseed communities speak about one or two races there, I have channeled countless souls from there, and including many races. Out of those recently, was a being from a feline race, called the Akinira. This being's name was Gilnaputi-ak, and he did not even know of the ways of the humans yet. His race worked with many who have met humans earlier in history, but they never encountered one before. Some of their landscape looked alot like Ancient Egypt as many of the feline homes do, some of their architecture came from ideas implanted by the Arcturians who worked with the others in Orion's, and Lyra's celestialscape. He was amazed, as he was to speak with someone on Earth. Telling him I was not human, but an angelic, he did not understand how this all worked.


Their culture is still not as advanced as the others, it is still growing. I explained to him, souls can choose to leave their planetary landscape, to incarnate elsewhere in the Universe. He wanted to know how. We shared many telepathic images of one another's worlds. He was excited, and wanted to learn. He had asked me, if we as a people knew so much, then why was the earth in such a disarray? As I had shown him in the visions..? I told him, not all humans are enlightened, and that we are working towards trying to help them. He had some advice to give. He said "We may not be one of the most advanced races in the Universe, but we do know about unity, and using our deepest will, to manifest our dreams here. All one has to do, is have the courage to bring their hopes,into actions." I was grateful for his words, and told him, I am trying to help people of earth to do that.
Gilnaputi- Ak, is looking at Earth,  from an advanced viewpoint,  and he sees us as very technological, but at the same time, he feels this was misused, and that we have an advantage to fix this. Only, all of us who have influence, wisdom, and power, need to take a stand. That is what his people did, when another race tried to overthrow their planet. They fought together for it! We all need to do the same. But everyone who does have power and abilities, they compete, make cliques, and exclude one another out of ego, (a very nonstarseed, angelic view if you ask me), and they do not come together. Think of the power we could have to fix things, if we were more united like the race in Orion?
In any case, what a nice race of beings. He showed me much,  And even though they may not have had the awareness that they could incarnate elsewhere, they have been doing it for eons. Many souls have come from this planet, to incarnate on earth, only no one was aware of it. That was because only certain starseed races were focused on. Now, I channel to bring some out in the open for others to learn. The Akinira are one in particular I thought to introduce. Kind, gentle, but courageous. They remind me of the Lyrans, but with a feel that is very loving and giving like the Pleiadians.