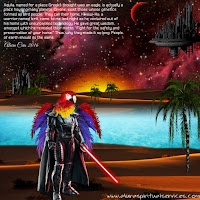 The Kikawi-ka, is another race of beings that I have come to present to you all here with, on Earth, There are many more. Some, even stranger looking. However, they are all beautiful in their strangeness. I channel many beings, it is true. Icrit, a humanoid Bird figure from Aquila, came to me last night briefly as he was exploring Earth. In his dark ship, he was disguised in the dark of the night. there were no lights, and no sound. "Kew kechnology Kalura". He tried so hard to say my name, but the heavy "Ka" sounds in their language made it hard. I couldn't help but giggle at him, as he stood looking like, I was the strange one. He had said, "it is new technology Alura". I will translate the conversation for you all from this moment forward, but to be honest, I stood before this being, in the middle of the night, and I was afraid at first due to his intrusion. Then..looking at him,  I saw him no longer a threat, but instead, an enormous pet. I wanted to cuddle him, as he was so cute. Even though he was dressed in his armor, looking fierce. This is worn to protect against any human attackers, who may be scared by his presence and try to defend themselves, I certainly wasn't scared anymore. He was simply a fluffy bird, who happened to have a human looking form. No. I was not scared..  I sat there smiling.

He asked me what I was smiling at.. I told him, "Forgive me Icrit, I am just an animal lover, and out of all of the beings that I have come to meet, you are the cutest".  He blushed, but then he got defensive. "I am not cute, I am strong and intimidating". My goodness... well, if that is what he wished to believe. "You are young in your home, are you not"? I asked him.. "Yes how did you know"?... "Just a good guess I told him". He wanted to talk, to find out all he could about Earth, and he wanted to tell me all about the war on his planet, but he was having trouble. At times he sounded like he was choking as he spoke. I asked what was happening. He said, "Earth's air is harsh, and thick" he replied.  "I know, I have trouble too, coughing all of the time,  and I often have a scratchy voice and throat", I related to him. I told him who and what I was, and how Earth life was poisonous to me as well."  He seemed to feel pity. "I do not have long," he told me.

in the short time that we had, we talked.  He told me he was looking for our leader at first, in order to find someone who could help fight the felines who were attacking from another star system ( this is another out there) and rid his planet of them for good. Instead, during his search, he had ended up seeing a huge beam of light that he followed. He said it had led him to me. "Do you know you have such a huge beam of light around you, that reaches in the sky and higher?" He asked me. I shook my head yes, and told him, that I would explain, but wanted to hear what he had to say first. He acknowledged this and continued, telling me that he had seen some air crafts on his way. They seemed to be hostile towards him. I told him that, that was how our government was. Attacking the innocent, or the foreign.. without cause. He told me that he was glad to have not found our leader, after all. He also told me why he was here, and what he was hoping to do. Then, he crouched down to look at my pet parakeets.

"Why are they in a cage?", he asked, "I do not keep them in the cage, they just sleep there for their protection, and come out during the day." I replied.  "What are they being protected from", he asked puzzled... "My cats"... "Whattttt!", he exclaimed. He was jumping around, looking from left to right, in front and behind. "Whats wrong Icrit"? I asked him, touching his shoulder to sooth him... "The cats have given us much distress on my planet, war after war.", he explained, still startled and looking for the near by enemy.  I told him "No, these are not the same, cats here, are on four legs, small and would be afraid of you instead.  I asked him, "would you want to see one"? "Oh no.. not at all".

"Eh, cmon, let me show you, its okay, really, nothing to fear", I reassured. I stepped out in to the hall to find my kitty Boo Boo. I picked her up in the usual baby carrying manner, as she loves.  I took her in to see Icrit, who looked down at this tiny version of his enemy. "Hahahahah,,", he laughed, very deep from the belly. "Your not so tough, now are you?" He said, directing his sarcasm to my cat.
"See Icrit, she's nice". He reached down to pet her as I was, and Boo Boo's fur stood on all ends, and she bolted out of the room, to hide in some other part of the house.

"She is scared of you", I said with a smirk. I knew this would flatter his ego, since he had so much trouble with the felines in his world. He was a youngster, still trying to prove his warrior status. ... "Serves her right", Icrit proudly proclaimed... Then, we sat to speak on his life. I told him about Earth, and the animals here, I also went into the beginning of things on this planet, and what was happening now. I told him about my life in heaven too. Then, he told me stories of his world.. How they were always at war with a race of felines who came from another star system. He told me how they had to reinforce their world with a dark iron metal, their buildings made of this, and how he felt it was dark and ugly. "I hate having the dark iron structures, in what used to be a paradise. He told me of his want to find a new place for his people, but Earth would not be the right place at all. He did not like the air, or busy atmosphere of our planet. So, he would go to look for another. After awhile, he starting coughing again. "You had better get going Icrit, the air seems to be affecting you badly now", I told him, with a concerned motherly voice. I was disappointed to see him go, but knew he had to.

"Yes, I should, but it was wonderful to meet a human angel. I will tell my people all about you, and what you have taught me, I appreciate your kind reception, and hospitality... Kalura"... At that, he went on his ship, and left, in a blink, he was gone..

What I had learned from this visitor, and I am adding it here, is that there were souls who came to Earth from Aquila, way back in the days of Lemuria, among the crowd of star beings who helped teach. It had only been a few of them, but they came to help populate the Earth, and it seems that they never did go home. These ancient beings of the Stars, have been on Earth for what seem to have been forever. This is what Icrit had hoped to also uncover. He had hoped to find not only the leader of Earth, but some of his long lost people. These are not actually classified as Starseeds, as they were ancient of days, until they started to die, after the shift on Earth that started to create death. They have been incarnating ever since. Icrit said that they were great Magicians, and were responsible for great ceremonies, that he would not be surprised if they were still involved. Before he left, I asked what to be on the look out for as far as traits. Afterwards, I went to find out the blueprints of these souls too, in case.

Aquila Soul Traits:
Deeply into all forms of magic
They explore all kinds of occult and esoteric wisdom
They hold a powerful force of energy within them, and powerful spells are made by them.
They have a great quiet and mysterious nature to them, and do not like to be bothered by others
they keep to them selves, or hang with a small group who may have magic in common.
It is hard for them to find one another, as many may have spread out all over, but in warm areas.
They love heights and mountain climbing as meditation. May even be tree climbers for fun.
They are sometimes moody, but they aren't actually sad, they are merely experiencing the energies around them.
These souls have a deep wisdom that they do not feel that they have to prove,so what they do is often kept secret, except from those who join them.

I have also discovered that souls who have been here for so long, who came from Aquila, are not adapted to any spiritual or religious movement, but are souls who would be exploring in all fields, but ones secretive, and hidden. They may even write or blog anonymously. It may be hard for them to discover who they are, as their memory will be gone, and they love psychic stuff, but may not be into the ideas promoting souls who come from other worlds.