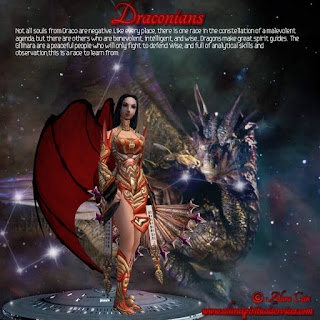 I have said many times,not all Reptilians, Dragons, or Insectoid species are bad as many try to say. So I did stick up for these races many times, and it is true, not all are bad. In my previous article I was speaking on many of the negative traits of the Rebel race from a planet called Lifgaria in the constellation, (which is not even a constellation after all as the stars and planets are far from one another), but many of these "channelers" do not really know, so they assume there is only one place these souls come from. I had said how many of these Lifgarian souls incarnate in very powerful, abusive positions on earth, And it is true, who do you think besides fallen angels are running things here? The Lifgarians are mixed with Insectoids, Reptilian like races, and Dragons. Ones that were abused themselves in experiments and who make history repeat itself, by doing the same in their home, and then come to earth to try to regain power in a human world. But, yes, not all dragon, reptilian or insect races are bad. I have met many from Draco even (there are many places in the Universe that contain similar races too,not just Draco) but the ones that I have channeled from Draco had very specific energies, not all are the same, but very similar. Some of the other Draco souls are:

1. Intelligent
2. Analytical
3. Confident (not all)
4. Very assured and motivated
5. Successful
6. Good at reading others
7. Good at being very persuasive
8. Directly spoken, blunt and charismatic
9. Witty, and Clever
10.Strong willed
11.Have Predominant personalities
12.Assertive
13.Sometimes long for more emotional fulfillment
14.Full of ancient wisdom
15.Good at building things
16.Absorb info quickly
17.Highly observant (nothing gets past them and they are not naive or foolish)
18.Very organized, calculated and strategic
19.Good story tellers, and entertaining to others,
20.Positive attention grabbers.

Draco starseeds are good scientists, mathematicians, politicians, actors, and engineers... Many even go on to become professors in ancient history, Those are a few of the Draconian traits, and very true according to those I have known... But those from Lifgaria, have an opposite side of traits as they are more on the malevolent side...

Lifgarians are:
1. Cunning, sly
2. Good at lying, so good that they sound true
3. Dominating and controlling
4. Assert power in order to get ahead
5. Calculated and sometimes very self absorbed
6. Compelling to meet their ends
.
Those who encounter a Lifgarian soul feel overpowered by their personality right away,and often fall into doing things for them when they ask, almost trance like. They go on to become politicians, huge bankers, military commanders, and politicians, as well but use it for a negative agenda.. I have even met many who do nothing with their lives, but manipulate others to get by.. I have a dragon as my spirit animal, so I know that they are not all bad. Many clients of mine, also have a dragon in their totem.  I know them to be wise, and powerful souls.

None of this is being said to offend anyone. It is only what I know of the Lifgarians, I personally have nothing against any soul, as I have said, just to make it clear. This article is not to put down, but simply to inform.. But yes,not all souls from Draco are this way, not even all of them from Lifgaria, only some of the Lifgarians. Draco souls have alot of strong,positive traits that can be used to build the planet backup with their very deep sense of wisdom. I wanted to make this clear, so that no one would feel hurt or confuse my purpose or intent of the article, Now everyone has traits from both, with double the information...Many should have known that there are many places out there, and anyone knowing me for the sweet person I am, I would never deliberately target anyone.However, as with anything before enlightenment, there is contrast.  There are many misconceptions out there on these races.
Some have said that they are the Anunaki. Some have said that they come Alpha Centauri. neither, are true. Draconians originated in a place that is located in Orion. Some of them.. Orion has many types of species within their home star system.